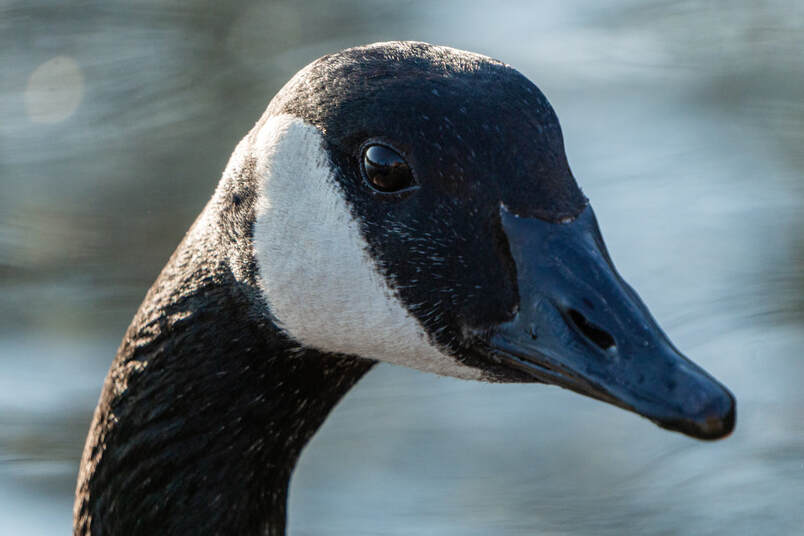 
A vast and dense flock of geese circles and hovers over the man-made pond in City Park. Loud honks and the flaps of their feathered wings ripple through the darkening evening sky. The flock instantaneously splinters. One group descends into the pond’s murky water, green with algae, while the other heads south over the fields of the large park, over the crowds playing volleyball, the strolling lovers, the gathered mass for a free jazz concert in the suspicious warmth of an early-June Denver Sunday.
Over the pond, one large goose glides gently down toward the water, then spirals up again, unready or unwilling to land with the rest of the geese. A man and woman walk by, arms around each other’s waists, and stop near a concrete retaining wall to watch. The goose rises, flaps and spreads, then descends again, this time coasting directly at the couple. They do not move, awed by the beauty and majesty of the goose’s ease and grace.
The goose pulls back, slowly angling, lifting, and swirling, knows it is being watched. It spreads its wings wide and dangles its legs as it dips down toward the water before swooping up once again.
The couple move along and the goose eyes a landing spot amongst the flock, but there are too many geese in the pond. The goose, double the size of the other geese, the ancient ancestral mother, layer of the golden egg, the great mythic goose of creation, barges down atop the others who make way noisily, angrily, shake their bodies in the water and instantly forget.
A few weeks later, in the early hours of a July morning, a crew herd hundreds of geese down a makeshift corridor of orange plastic fencing. A parade of anxious cackling and waddling. The birds’ feathers are molting, making way for the new feather growth that will never come. They cannot fly, only march to the end of the path, where gloved and masked Parks and Wildlife workers await, then swiftly pluck the geese up, the geese screaming and thrashing, and stuff them into coffin-sized orange plastic crates.
An animal rights activist nearby films the agents with his phone as they work and try to ignore him. He pleads with them. The geese were not harming anyone, he says. They were not a threat or a danger to humans, he reasons. One of the workers holds up a permit issued by the state, stamped, embossed with a seal. Official. A jogger passes by and stops to film as well. He is crying. A homeless man lying in the bushes nearby, a filthy sleeping bag over his body, waves and moans indecipherably. The geese are loud in their pleas for release as the stacked goose-filled cages jostle and scrape against each other.
This isn’t right. There has to be a better way, the jogger shouts.
A Parks and Wildlife worker reads from the permit. There have been unhealthy accumulations of feces, instances of goose aggression, and overgrazing, he says, clearly frustrated by this interruption to their work.
Maybe you should be killed for what you’re doing? the animal rights activist says.
Is that a threat? I’ll call the police.
It’s just a question. Maybe humans should be rounded up and killed like this.
You don’t scare me. I’ve gotten lots of death threats over these geese already.
We’re experts. We have a wildlife biologist here with us, another agent says, trying to deescalate. We know what we’re doing. There’s poop everywhere. The geese have eaten everything. Besides, the meat goes to the needy, like that guy over there.
The parks were built for people, not geese, the wildlife biologist says.
This ends the real-life discussion. It is continued online, incessantly, through social media, for a little while at least, until everyone gets distracted, or forgets, and moves on to something else. The next outrage, the next injustice. The homeless man snarls and is ignored.
The workers pile the orange goose-filled crates into large white trucks, climb in and drive away. The animal rights activist looks down and taps rapidly on his phone and stomps away. The jogger taps his smartwatch and continues his morning run, before stopping abruptly. Fuck! he yells. He has stepped in dog shit that no one cleaned.
​The homeless man turns onto his side and sees the empty pond, curses the heavens above and the earth below.
Tweet
Share