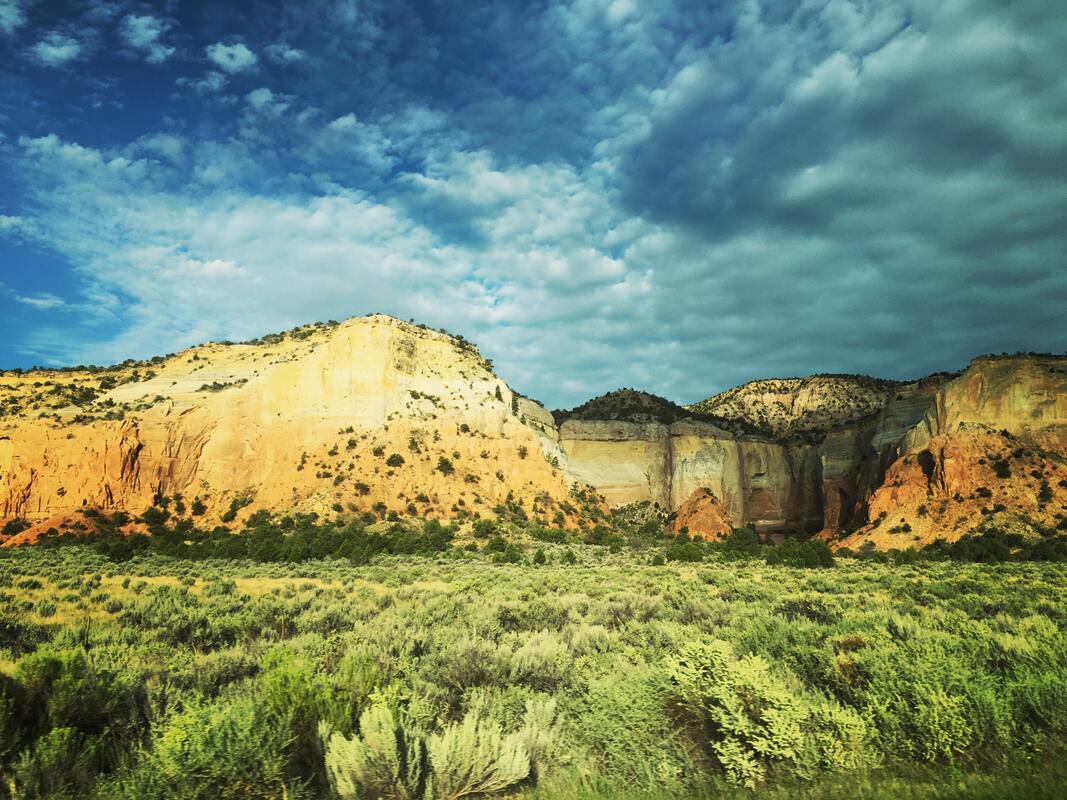 
I was nearly content just slugging bourbon, bobbing my head, and watching the sea of boots keeping the bluegrass beat at the Continental Club. Austin has a sound. But that’s only half the reason I’d come to Texas. The other half was to satiate my appetite for knowing the “quality of the light” in the western desert. That light could lure Donald Judd from New York City struck me as absurd. Of all the myths about the West, it was a minimalist, egocentric, sculptor’s description of sunshine that nagged at my curiosity. Later, I’d need to chase Georgia O’Keefe’s New Mexican desert. I needed to be where their ghosts stirred, and to learn what they knew.

The landscape along Interstate 10 between swinging Austin and sleepy Marfa doesn’t change in an instant. In a rented white Ford F-150 pickup truck, I drove us across the Bluebonnet state. Towering cedars and sycamores eventually gave way to yucca shrubs, wildflowers (thanks Lady Bird Johnson), and then to desert sages and low grasses. On either side of the highway, I saw oil rigs for the first time, as far as I know. I’d be reminded of human demands even where I thought there weren’t any.

Jackrabbits and deer ran wild. Cattle and emus scattered in clumps out in the distance; fences–it struck me–would have been prosperous propositions. Ornate metalwork labeled ranch gates hundreds of miles apart. Masterful fabrication that might be seen only a handful of times gave me a greater sense of what it might mean to have “Texas Pride.”

The further we traveled, the more the highway was an interruption through the windshield. It bisected something far too mesmerizing, the horizontality of the sky. An illusion that everything outdoors was only two-dimensional and flat unsettled me. Could I tip the whole set over with a poke of my pointer finger? Even the distant mountains seemed like props.

In the wild grass adjacent to B & B Gas Station–a minor detour from our route–my feet felt the subtle shifts in height along the seemingly even ground. The little bumps and rocks had give; beneath my boots was nothing more than a loose layer of sediment. The lightest breeze shook the ground up into inescapable dust. Any animal tracks or footprints would be erased.

The rough grasses brought back memories of sprawling, broccoli-hued lawns in the Northeast. After the torrential spring rains, summer lawns practically glow like neon welcome signs. If our manicured Northeastern lawns said, “Hello neighbor,” then these clumpy, wild clusters were “keep out” signs. And save for a few cumulus pillows, the sun had no competition lying in the bed of blue.

In New York City, where I’d spent most of my life, it was rare to find a surface–let alone a foot of ground or sky–without some reminder that you were among people. Buildings stretched to the sun. They were built to suit business and housing needs. Sidewalks indicated where people should walk. And of course, streets were made for people’s transportation demands. Out here, the wild spaces carried on without being interrupted by humans. Designations for the wilderness didn’t seem to exist–at least, to my untrained eyes. It all seemed infinite and unbounded. But where do you look when you don’t have to focus on humanity?

I was eight years old when I saw the Hieronymus Bosch three-paneled painting The Garden of Earthly Delights at the Prado Museum. It filled my little brain with new ideas. I was especially overcome by the images of Hell. The three works hypnotized me; I know this because despite being terrified by the images, I remained transfixed. Whenever the fears cropped up, I told myself to look away until the feelings passed. That the frames contained the chaos was what gave me peace of mind. The horrors of Hell would stir my imagination each time I looked at the panel and then I’d be reassured by the frame. Or I could gaze to the ceiling of the museum. The Prado could keep all of the wild within its walls and sandwiched between its floor and ceiling.

Standing outside was like looking–transfixed and hypnotized–at the Bosch. Now, the fear felt different than when I was eight, but no less familiar. Before this triptych of heaven (the endless sky), middle earth (the Trans Pecos mountains), and a sublayer, not Hell exactly, but these uninviting plants; I was untethered. Would I just float away into this boundless stratosphere never to be known again?

I wondered whether Donald Judd had felt scared too. He had lived and worked at 100 Spring Street in Soho. I once knew the girl, Emily, who was tasked with cataloging his spoon collection. He collected these seemingly mundane household items. She counted them and organized them shortly after he died. For years the space was in transition. Now, I think, it’s his museum. He wanted his work to be installed permanently. In Marfa, he found the perfect home for his sculptures in an old military base. In town, he started an architecture firm. I didn’t visit his horse ranch.

The morning after arriving in Marfa, I left our tent just before the sun rose. I glanced down to find the handle of my coffee mug and in an instant the orange orb appeared, bobbing just over the sprawling flatness. Within seconds, streams of color spread out in all directions, completely unrestrained by fixtures erected to elevate the status of humanity. There are signs of human life out here, but they aren’t skyscrapers. Awe comes on quick and sharp from watching light linger on drab surfaces, spikey vegetation and on the backs of lizards warming their cold-blooded bodies.

The awe stays with you because the light actually does change so swiftly. Being unrestrained, the sun’s constant ascension is felt. Seconds build quickest, then minutes collect fast, and within hours the landscape is transformed by how the sun and wind cast their forces against it. By the time I had to leave, I’d just started to understand why Judd felt compelled to stay.

Georgia O’Keefe lived in a place called Ghost Ranch in Abiquiú, New Mexico. Her house is still there. It’s rich in elemental appeal: adobe, wood, neutral painted walls and giant windows for seeing the high desert views. She was called to the light of the West before Judd.

Occasionally, while in the New Mexican high desert, you can see mesas and plateaus disrupting the horizon. Despite these minor interruptions, the sky is elongated horizontally too. Like West Texas, at night in the New Mexico desert, I felt the sky and the stars against my nose. Years of light pollution made me forget the wonders of astronomy ever present above. Back against the woven blanket, gazing up, my lips practically kissed the constellations.

The sunrises are as impeccable here; still, I want the adobe buildings and human achievements to trump the grandeur of the unexplainable force behind the natural world. In New Mexico, I searched for the frame I never found in West Texas.

Along the mountain trails or on grainy paths, it’s easy to stumble on quartz or other shiny minerals. There are entire parks comprised of gypsum particles that look white and have a moon dust luster. The only people I come in contact with here are the kind that keep to themselves. Maybe, like me, they’re here for the specific quiet that comes from being pressed up against grandness of desolation.

On the drive from Santa Fe to Taos, the Rio Grande Gorge crept up fast. The red Toyota 4-Runner–rented on this trip–was like a rocking chair lulling its passengers into a dreamy state of contentment. The two-lane bridge expanding across an 800-foot crevice jolts its onlookers to attention. In an instant the ground fell from being flat, safe, and mundanely punctuated with patches of grass. The ancient river path has carved such a deep cut into the earth that the Woolworth Building could sit at the bottom and still have another hundred feet above. The Sangre de Cristo Mountains extend far up in contrast to the geologic gash. Surprisingly, bighorn sheep nibble at the plants growing along the ridges of the gorge.

Being on the precipice induces dizzying vertigo. Where is the frame? My eyes darted between the overwhelming depths of the gorge and its beautiful layers of stratified rock, to the ever-expanding flatlands covered with craggy shrubs, and then to the snow-capped, majestic mountain peaks. Georgia O’Keefe knew this secret ratio; I was sure of it. Maybe she only painted portions of any of this, I mused, because her best renderings would fall too short. Had this place whispered to her the secrets of human limitations?

In West Texas and New Mexico, I lost the frame for good. I no longer worship at the altar of human achievements. Judd and O’Keefe learned that lesson long before me. They were drawn to the handiwork of a more divine artist. Traveling their paths led me to see a new one for myself. Along this new path, humanity’s hitching posts are dwarfed by towering metaphysical lampposts. It’s hard for me to avoid feeling a sense of existential transcendence when I go to the desert out west.