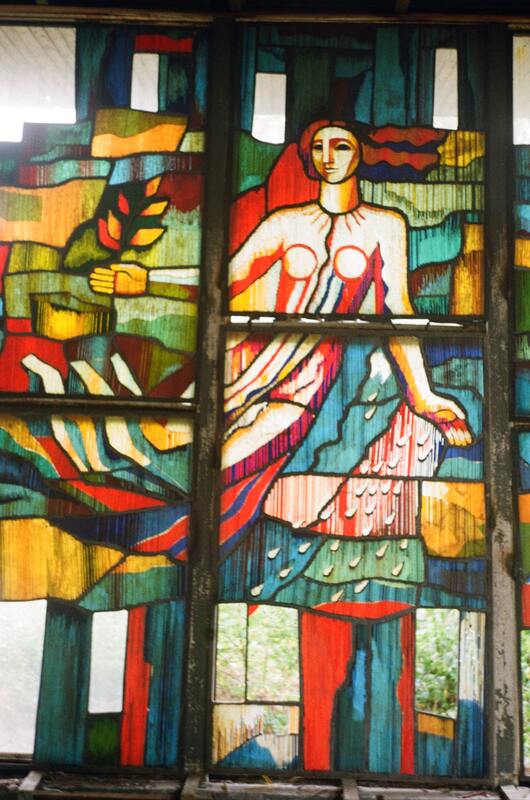 
Galina and Lyubov walk with purpose into the forest, having hidden their bicycles under fallen pine branches just off the road. It is June, and the early morning light is clear, gold-tinted, pure.
“Avoid that area,” Lyubov tells her niece, pointing an emphatic finger at a patch of forest strewn with bushes and undergrowth. Ripe blueberries gleam like fragments of the night sky amidst the greenery.
“That’s a hotspot,” Lyubov informs her. “High radiation. Those berries go for a lower price at market.”

They work ten-hour days, picking the ripening blueberries, fending off the bugs and the heat and the occasional downpours, sheltering under the trees, covering themselves with whatever’s available. Every child in Galina’s village has been taught to be wary of the rain. Even now, over thirty years later, it could still be poisoned.
They haul their berries to the roadside, where the older women from town, sheltering under beach umbrellas, keep a careful eye on them. The berry buyers come several times a week during midsummer, driving their vans from town to collect the fresh fruit. Lyubov, confident and experienced, handles the bartering, dropping hints about other, more generous berry buyers. The men and women from the towns roll their eyes and raise their offers by a dollar or two.
“Your share,” Lyubov tells her niece after each sale, handing over ten, fifteen, or even twenty dollars–more money than Galina has seen in her life. Within two weeks, she’s earned more than her poor papa earned, God rest him, in a month teaching times tables and geography at the schoolhouse.
She spends a little on a new book and a beautiful green scarf but hordes most of it. She’s not sure what for. The future, maybe. Away from here.

One of the berry buyers is younger than most–a man in his early twenties with dark hair and a merry smile. He barters with Lyubov but winks at Galina, offering her a cigarette or chatting with her about her favourite programs on the radio. His name is Yury.
Galina is charmed, and intrigued. She’s never met a man like Yury before. The young men in her village spend their time lounging outside the solitary bar, cadging cigarettes, and getting into fistfights over who supports the better football team.
Yury is handsome, polite, and smart. He feigns horror when he learns she’s never been to Rokytne, where the berry buyers sell the fruit onwards.
Galina flushes, feeling more than ever like an unsophisticated country bumpkin. Yury realizes he’s committed a blunder, and, in an attempt to claw back his gains, blurts out an invitation.
“You could come with me, sometime. To the market, where we do the selling.”
Galina, excited and frightened, glances at her aunt. Lyubov grins at her wickedly.
“Not today, Yury. We’ve got work. But I could do without Galina on Thursday. Come back then.”

At long last, Thursday dawns. Galina is nervous, but Lyubov has prepared her for the expedition.
“Here’s money for an emergency,” her aunt says. “If he tries anything you aren’t happy to do, leave him and hitch a ride back with old Ulyana. I shouldn’t worry too much. Yury’s a decent boy. I know his family.”
Yury parks outside their modest house, right on time. He’s adorned with a black eye as ripe and dark as the blueberries. Galina stares at him, unable to conceal her dismay. She’d thought Yury was different from the village boys.
But she’s already committed, so she climbs into the passenger seat and braces herself as they drive off. She thinks she’ll make some excuse, when they arrive, and head back with old Ulyana as her aunt suggested.
Yury makes idle talk for the first ten minutes. Galina tries to be polite, but she is distant, and Yury soon falls silent. The van, laden with blueberries, trundles up the road towards Rokytne. Galina stares out of the window, greedily taking in the new road, new forest, new villages. At last, the old familiar landscape falls away, and they are enclosed by houses, apartment blocks, industrial constructions, shops with signs in bright primary colors.
“I got this eye off my dad,” Yury says, apropos of nothing. Galina whips her head round, staring at him in shock.
“Not his fault,” Yury explains in haste. “He’d fallen asleep in his armchair. He has nightmares, really bad ones. I went to wake him, and he swung at me. I forgot to keep my distance.”
“What does he dream about?” Galina asks, then curses her seeming lack of feeling. But Yury doesn’t falter.
“His time in the army sometimes. Mostly my mum,” he sighs. “She was a nurse. She took care of men with radiation poisoning. For months. When I was five, she got blood cancer. Dad nursed her until she died. He never talks about it, but he screams her name in his sleep. I wasn’t allowed to see her after she got really ill, but I know it must have been bad.”
Galina cannot think of anything to say. Instead, she reaches for Yury, lays her hand upon his shoulder, and squeezes. He takes a hand from the steering wheel and lays it over hers, squeezing back.
“My papa died of thyroid cancer when I was seven,” she tells him. “Mama the year after.”
She does not tell him the whole truth. That Mama had spent days on end locked in her bedroom, weeping. That her death was officially an accident. She’d been driving in the rain and lost control of the vehicle. How Lyubov had told her not to ask too many questions about her mother’s death, in case she learned something that could not be unlearned.
Perhaps she’ll tell Yury another day. Galina’s instincts tell her he wouldn’t condemn or criticize Mama.
They drive on, the silence now a sympathetic one.

Galina leaves the past behind as they reach the berry market. She helps Yury unload the blueberries, despite his demurring that she’s a guest and doesn’t need to work. The older men at market don’t comment on Yury’s black eye, but they wink at him and Galina and make vaguely suggestive comments.
“Yury! Who’s the new assistant? Where’d you find her? Does she have any sisters?”
Yury grins and turns pink at the attention. Galina’s presence means that he’s one of the men today, worthy of notice and friendly teasing. Galina keeps her head down, flustered by the sheer amount of things–of fruit, people, vans, buildings, conversation. Yury glances at her and mistakes the reason for her discomfort.
“Ignore them,” he tells her softly. “They don’t mean any harm.”
“I don’t mind them,” Galina tells him, truthfully. “It’s just so . . . busy.”
“It’s big business,” Yury informs her. “Most of these berries will go on to the EU. The market’s expanding all the time.”
Galina likes that Yury talks to her as an equal–like he assumes she has the intelligence to understand what he’s talking about. They chat about the fruit and export while they wait their turn for the woman with the Geiger counter to come over and assess their stock. Galina hears the other salespeople arguing with the woman: “No, that’s not right. The radiation’s coming off my truck. Measure it over there.”
About half the boxes of berries fail the test and are set aside. The woman comes at last and measures Yury’s offerings; all but one box passes. Yury gets a good price for the blueberries. The named sums make Galina gasp.
“That’s why I like buying off your aunt. She always avoids the worst areas,” Yury murmurs to Galina. “At least until the end of the season.”
Galina gazes at the boxes of “failed” berries, too radioactive for . . . what? Eating? Selling? She asks Yury about them.
“Oh, they’ll still buy them,” he tells her. “But at a lower price. Then they mix the hot berries with the cooler berries until the overall radiation levels are low enough to pass the EU tests, and they sell them on.”
Galina supposes she ought to feel shocked but can only summon a mild surprise. Since before she was born, everything has been tinged with radiation. Invisible, intangible, inescapable. Every berry and mushroom she’s ever eaten has been tainted by it. In her little village, babies are sometimes born dead. One pair of twins came out still attached to one another and had to be cut apart in Kiev. People who have been hale and healthy all their lives suddenly crumble, consumed by cancers. Like Yury’s mother. Like her papa.
Once, on the anniversary of Uncle Yegor’s death, Lyubov told Galina about that night–how she awoke for some undefinable reason. Yegor, a firefighter, was on duty. She wandered about their flat, restless, until she went and drew aside the curtain in the dining room.
A pillar of unearthly blue-white light bridged the earth and sky. Eerily beautiful. She knew then that the world had changed. Lyubov learned  many years later that the light was Cherenkov’s Light, ionising radiation. This wasn’t just an accident, or an “event” with a beginning and a climax and a conclusion. The old world had ended, and by hook or by crook, she must learn to survive in the new one.
Yegor was dead a month later. Lyubov had broken down in sobs at that stage of the story, tears and snot and spittle coating her face, shoul-ders heaving as if she were trying to heft a huge box of blueberries. Yegor had died in hospital in Kiev. That was all Galina knew, and she didn’t want to know any more.
Galina felt a gentle hand on her shoulder. The past faded away, the light dimmed, and she was standing in the market with Yury, people shouting and bartering and joking.
“Galina? Does it bother you, selling the berries like that?” Yury asks, hesitant. Galina looks at the blueberries, azure and tempting.
“I suppose not, if people are willing to buy them,” she answers, truthfully enough.
“They are,” Yury confirms. “It doesn’t bother them. Not much, anyway.”
They collect the money for the blueberries and pack up. Yury hesitates, hands on the steering wheel, key unturned in the ignition.
“I thought we could have dinner at a restaurant,” he says, diffident and casual. “Before we go back. If you want.”
“That sounds great,” Galina replies, beaming. The tension drains out of Yury’s shoulders and he smiles, relieved. He starts the van, and they putter off, deeper into the urban areas, where the flats and houses and buildings are smart and well-built and clean. Galina can see the future–if only the immediate future. Dinner at a little restaurant, a table with a white tablecloth, dark wood panelling and framed prints on the walls, a bottle of cheap red wine. Conversation, Yury’s hand reaching for hers, an exchange of smiles.
Then home. Her village, blueberry picking, and helping her aunt. Trips to town at Yury’s side. Galina doesn’t dare let herself dream further, but for the first time in a long while, the future shimmers with possibility.
Galina decides to get a present for Lyubov from town. Something pretty and frivolous and of no practical use. Just for fun. Her aunt hasn’t had enough fun in her life.
​Yury fiddles with the radio as they drive, looking for a station that plays the music she likes. News, weather, and traffic reports; then static. She tunes it out as they talk over its noise, low and constant, as they go for their dinner.
Tweet
Share