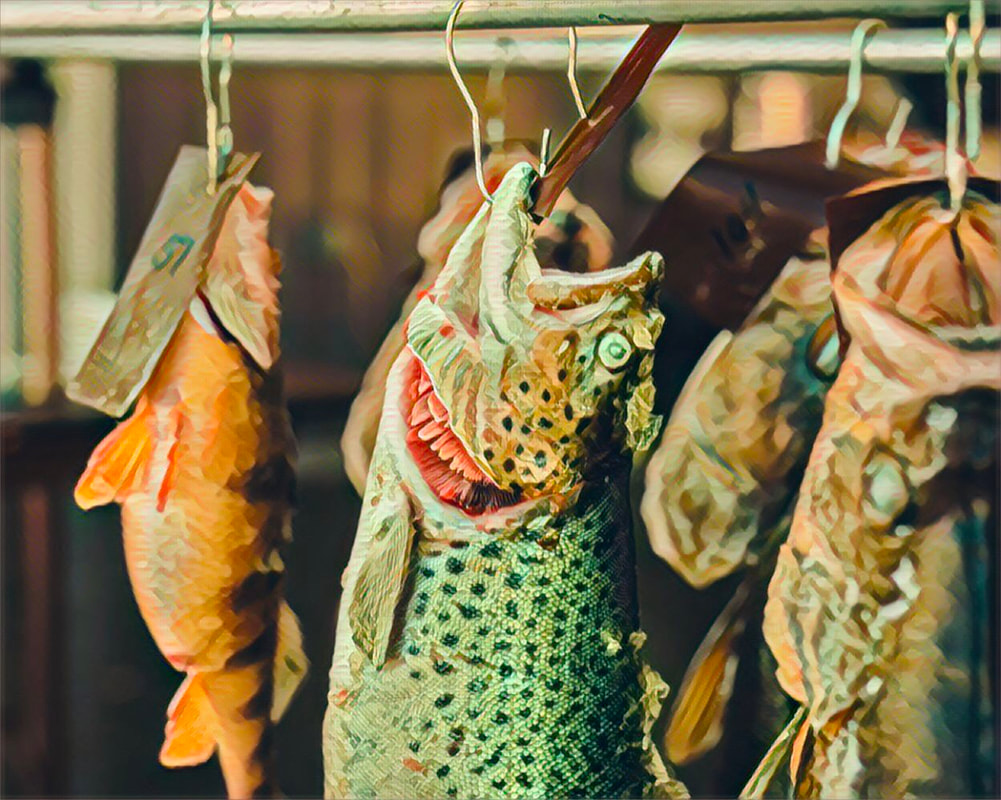 
My father’s passion was fishing; my mother’s was fish. You’d think that such a combination would be copacetic, but it proved otherwise.
The first time my father took me fishing, it was late August. It was four in the morning, and it was chilly. My mother and I had arrived in Canada for less than a week. We were still trying to get our bearings in Gum San, the Golden Mountain, and my father shook us awake. He bundled me up and packed us in the old Buick. I could hear the rattle of rods and reel, splashing water from the minnow can. In the back seat, I kept company with two Coleman lamps and a smelly fish net with a mesh big enough to engulf me.
“Fi-dai, fi-dai! Hurry, hurry!” my father exhorted in a mixture of Chinese and English. He had barely parked the Buick. Except for the stars, the place was dark. He started the Coleman  lamp, and already he was arranging the fishing gear. “This is the best spot. Fish bite like crazy! Believe you me.”
He handed my mother and me a fishing pole each. He expected us to know what to do. He had already cast two lines out for himself. “Where are we?” my mother asked timidly.
“This is the government dock. This is Lake Nipissing. Fishermen from all over Canada and the States come here to fish. We have just beat the other local fishermen.” He pointed to the spotty row of headlights coming onto the wharf.
My mother heard the soft slapping of water against the wooden dock. “What if my worthless puppy falls into the lake, husband? He is five. He doesn’t know how to swim.”
In the Chinese tradition, she did not want to call me by my true name. We were still strangers here in Canada, in Thibault Falls, in the middle of a lake with the wind rising. She was afraid that malevolent water demons might claim me if they were to know my name and entice me to the spirit world. To throw them off track, I was the worthless puppy.
Under the white glare of a Coleman lamp, my father baited the hooks with fat, silvery minnows. Then he cast the lines for us. He handed me a rod. He looped a thick rope around my waist and tied the other end to a wooden cleat. “Now the fish won’t catch you.”
By this time, several Canadian fishermen–fan gwei lo, white devils–were casting their reels and bantering jovially. Someone pointed to my being tied to the wharf and laughed. A few strolled over, and my father introduced us to the regulars who haunted the government dock before sunrise every weekend from the time fishing season opened in May until hook, line, and sinker ricocheted off the frozen lake in November.
“These fan gwei are as crazy as your father,” my mother whispered. “Worse, they smell of whiskey and beer.” Her opinion of them never changed, even when they frequented the Panama Cafe on workdays for breakfast, lunch or supper.
I caught my first fish ever that morning. It was a walleye pickerel. About six inches long. About half a pound. It was flapping around in the net. My father wanted to teach me how to unhook the fish, and, in revenge, the pickerel snapped its mouth shut on my finger. My mother took this to be the first ill omen of our stay in Gum San. In later years, when things weren’t going right, she would bring up this incident.
“You want to eat it for breakfast, or have it mounted over your bed?” My father asked as he bandaged my bleeding finger and tried to make me stop crying. I could manage a nod, but to which I wasn’t sure.
“For this, we were roused from warm beds,” my mother complained later in the Panama Cafe. My father caught six pickerel, two northern pikes, and a few perch. They were still flapping about in the stainless-steel trough.
Since we lived above the restaurant, my father changed from his weathered fishing clothes and started his seven o’clock shift. My mother went about filleting the catch and made fish balls. At late supper, some of the employees agreed that they hadn’t tasted fish balls this good since the last time they sojourned home in China. Although she did not admit to it, that compliment pleased my mother to no end.
The next morning was the same: fishing. My mother began to wonder about the man she married so long ago when he journeyed back to his village on the Pearl River to find a wife. At the time, she had thought she made quite a catch, a young man with money who could buy a house and plots of farm land. Then the war came, and an ocean and eight years separated them. He returned after the war to start a family, and then the Communists came. He returned to Gum San, and four years later we were huddled for the second time beside the Coleman lamp at the farthest end of the government dock with rod and reel in hand waiting for fish to bite at four in the morning. The light drizzle didn’t make my mother and me any happier.
“What will we do with all this fish?” I asked after having stuffed myself with filleted pickerel pan-fried in butter sauce–Canadian style, my father revealed–for breakfast. The catch filled half the trough; and later I learned we had exceeded the legal limit.
At supper my mother gave the employees steamed pickerel in black bean sauce.

When my father died, his fishing rods, tackle box, and gear vanished. These were the only few things that got put away. All of my father’s other things were left untouched as if mother had expected him to come back any day from a fishing trip to claim them and to use them. I thought nothing of this peculiarity if that gave her some comfort.
Though from time to time I wondered what became of the fishing stuff, I never asked. I had assumed that mother tackled that thorny matter by throwing all that in the garbage bin years ago. She would not want to be constantly reminded.
When my mother passed away, I was left to put the old house in order. I invaded the coal cellar that my father had converted into a place for cold storage. The room was cluttered with boxes and memories, from big restaurant, little cafe, to some of my childhood toys. There were boxes of unopened cigars, thrown in with comic books. Then, there in the farthest wall, thick with dust and cobwebs, were my father’s rods, reels, tackle box, and hip waders.
And right behind those were shelf upon shelf of identifiable jars of preserved, pickled pickerel.
My father’s passion was fishing; my mother’s was fish.
Tweet
Share