It’s like when you’re in Japan for the first time so you go to the largest sex store in all of Tokyo on a mission to bring back “The Weirdest Thing You Can Find” on a dare from a friend in the States, but then “The Weirdest Thing You Can Find” is an adorable stuffed animal fox that has a horrifyingly puckered hole in between its small furry legs—which really just makes you feel sad—so you’re about to leave the store empty-handed, but on your way out, you see a silicone tit ball with a protruding red nipple on one side, so you buy it for your friend and lug it around with you on the rest of your trip—up to the snow monkey mountains and all around Kyoto—and on the night before you leave the country, you pack your luggage, carefully wrapping the tit ball inside your dirty clothes, but then, when you’re going through customs in China for your flight connection, the image of the tit ball LOOKS EXACTLY LIKE DYNAMITE on their security screens, so the sirens go off and the entire room shuts down and Chinese police jog in holding guns up to your face and all you can do is shout, “It’s just a tit ball!” over and over again, but they have no idea what you’re saying and probably think it’s some kind of terrorist salute, so they tie your hands behind your back and bring you into a little room where you sit alone waiting for so many hours that your bladder swells to the size of a volleyball and you shout out loud that you need to pee but no one comes to the door so you start obsessively thinking of the story your mom told you about the stage actress whose bladder exploded during a performance because she was so rushed to get onto the stage, and you wonder why you have never looked that up to confirm if it’s even true, but you feel like you are almost to the point of bladder popping death and it’s better to piss yourself than to die locked up in a security room in China, so you decide to just go, which you discover is actually rather hard to convince your body to do, but once you finally start it’s like an exploding soda and you’re glad that you’re wearing a skirt so at least most of it splashes onto their carpet, and then, as you are sitting there in your urine soaked panties in the hot stuffy room, a woman in a uniform finally comes inside and you see her pause for a moment as she realizes what you have done, inhaling the soggy fumes, but her face is completely emotionless as she tells you that she can speak English, so you explain how it wasn’t a weapon at all, how it was only a weird tit ball from Japan, and she just continues to stare at you with her stony hollow face and then she walks out of the room without saying anything, and then after what feels like another hour, two police officers come in and untie your hands, which are so numb now you can’t feel them at all, and they escort you through the airport as needles of blood begin to crawl down your arms and enter your fingers, and then they walk you down a ramp and onto a plane, and as they sit you in an aisle seat another officer walks up and places your luggage in the overhead compartment—and you realize they are ACTUALLY FUCKING LETTING YOU LEAVE—and you hear the flight attendant say in broken English that the plane is headed for L.A. and you have no idea if the tit ball is still in your bag or not because you’re in too much shock to say or do anything but turn your head towards the little oval window at the end of your row, and as the plane takes off, all you can see is pollution and cement and it looks like the sky is exploding tiny red nipples all over the ground. 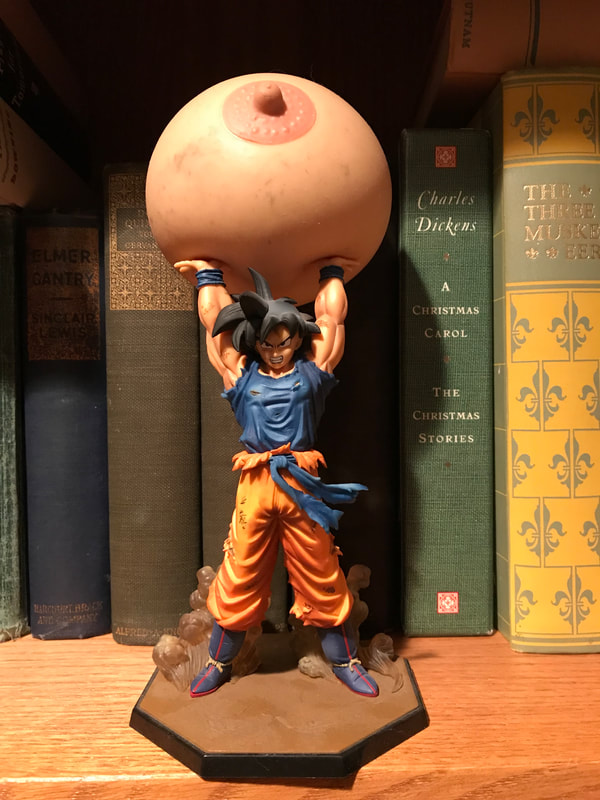