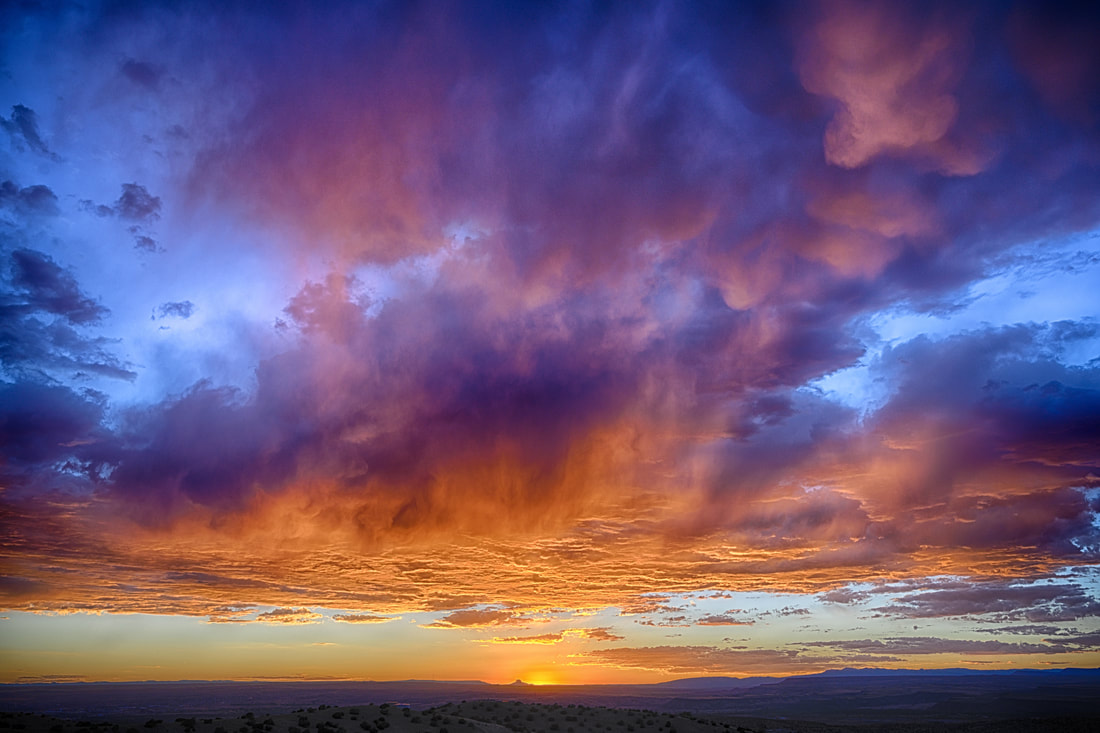 Sunset Behind Cabezon Mesa in Northern New Mexico, by John Fowler
Something in Between
Trent Hudley

He drove north on I-25 through New Mexico. All his possessions in the back of the car. He didn’t know how long he had been driving, and he didn’t care, but his legs were aching and beginning to get numb. Just after the exit to Salem, he decided to stop and get out and stretch. He pulled off onto a service road, parked next to a crumpling length of fence constructed of three strands of rusted barbed wire and rotting wood that stretched north and south to the horizons. The condition and expanse of the fence didn’t disconcert him as it would on any other day. Today it was not a necessary representation of the world, today it was ambiguous, curious even. It was a warm day. He walked into the surrounding desert. In a dark blue sky, there were thin cirrus clouds, poised above the distant rocky face of the San Andres Mountains. A breeze blew through the tops of grama grass. Scaly trunk yucca plants sat big and round in the landscape amongst the tall, thin, powder-colored lengths of white ratany, the sagebrush, and the urchinlike desert spoon. The ground was hard and brown. Bone-white stones were scattered, at random, in piles throughout the landscape. He heard the forlorn voice of a mourning dove in the distance and watched as a jackrabbit sprinted away from under a patch of galleta grass. The service road disappeared from sight. He stopped walking and stood looking. He was not afraid today.
His heartbeat was calm, his breath steady, and his palms did not sweat. His head did not ache. This was new. Here there was silence and stillness that calmed him. He felt relaxed, at peace, oddly hopeful. His world, that immutable banality and relentless moil that set him on the road, seemed now like a remote past.
At the summit of a hill he looked around. The desert’s vastness made him feel as if he could dissolve into the cool air and stretch across the land forever, expanding but never breaking apart, an airy membrane inching his way into and over the whole world, simultaneously inhaled and exhaled by himself and every living thing on the planet, entering through lungs and gills and the skin of men, beasts and plants, flowing through bloodstreams, cell walls, mucus membranes, into arteries, capillaries, and veins, into hearts beating with life or fading into death, into minds full of pain and joy. The world stretched before him, and he wept with deep sorrow, happiness, and something in between.
He squatted down and watched a line of red ants come in and out of their colony by the hundreds. Among them, smaller black beetles—he had no idea what they were—scurried, seemingly aimless, between the ants, which took no notice of the creatures. He was excited that he saw the little beetles and that he didn’t know what they were. He got on his hands and knees and crawled around the hill looking for other things he had never seen. Oddly formed rocks, a corkscrew-shaped, emerald-green blade of grass underneath a stone, deer mouse shit, the downy underfeather of some type of bird caught in the middle of an early-blooming cactus flower, a small, sun-bleached particle he imagined to be the humerus bone of a kangaroo rat, even though he didn’t know if they had humerus bones or even lived in this part of the Chihuahuan Desert. The warmth of the sand felt good against his forearms and elbows as he trailed his finger through a miniature gully made by some long-ago rivulet of rain.
The sun was getting close to setting behind the mountains. He figured he should leave before it got dark and he lost his way, which didn’t seem so frightening. The scraping of his shoes against the sand and dirt was a rhythmic, hypnotic sound. He sat in the car with the engine running, Coltrane’s A Love Supreme drifting out of the speakers, and the sun spraying the western sky with orange, blues and pinks. He put the car in gear. He did not know where he was going. He did not know where he would end up. He pulled out of the space back onto the highway. The hum of the tires on the road merged with the music in the car as he drove.