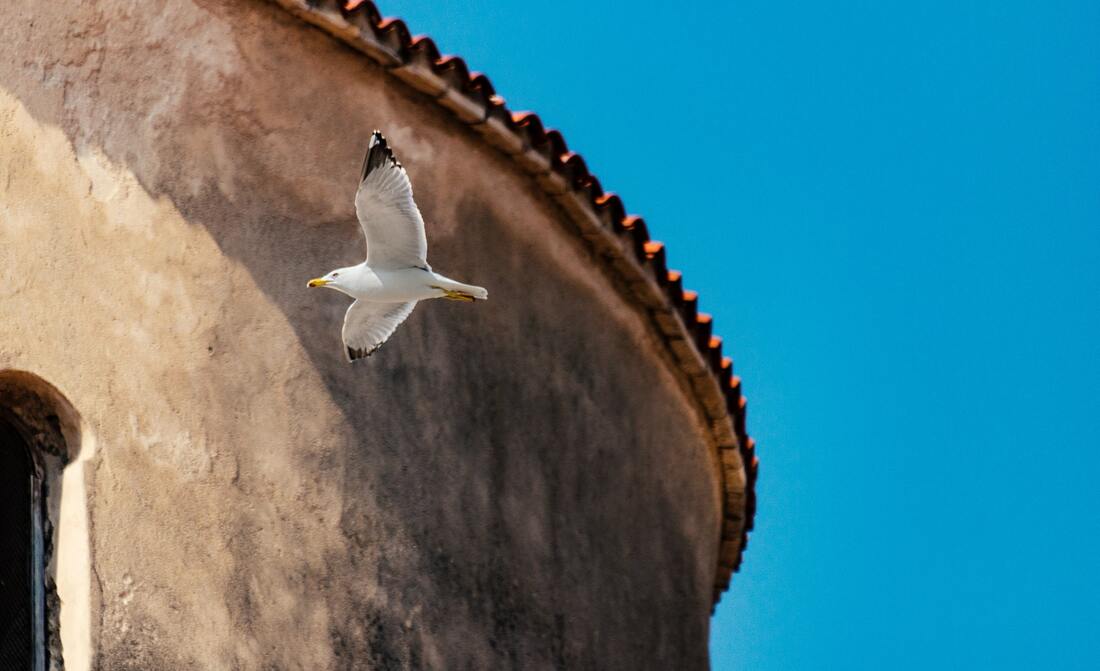 
Opaque eyes of a skinless sh eep head staring from the meat counter display made her uneasy. Oppressive fluorescent lighting, a single jammed cartwheel refusing to turn, vibrant cereal boxes with cartoon animals promising magical breakfasts–it felt like home. InterSPAR was Costco, except for the lifeless lamb passing its judgment, while she wrestled her cart down the aisle.
She stood in line, the anxiety of her impending interaction growing. Numbers might come flying from the cashier’s mouth faster than she could comprehend. She took inventory: blitva, špinat, tjestinina, pršut, jagode, kava. The line grew. She considered putting it all back. A little swiss chard and spinach remained in the refrigerator. There were strawberries at the market. But the coffee was worth the transaction.
Each beep of the scanner made her heart rate quicken. Would she successfully tease the meaning from the rapid words? Would she understand? Would she be good enough? She fixated on the cashier’s firing lips.
“Četerdeset šest, pedeset.”
She tried to inhale comprehension, to block out the impatient mother behind her. Forty-six, something. She hastily handed a fifty kuna bill to the agitated cashier, accepted her change, and stuffed her groceries into a sack. Checkout felt rushed, pressured, simultaneously American and not.
The glass door opened, and she breathed in moped exhaust. The encouraging Adriatic sun shone, and she welcomed its warm embrace. The maritime breeze enveloped her, reminding her to čekaj malo.
And she would. She’d wait a little for the cheap dževa she’d purchased to warm on the stove. She’d wait a little for the deliciously rich sludge to cool enough to drink. She’d wait between sips, savoring sweetness and bitterness upon her tongue. She would, and she did.
As she left the three-story house on Varaždinska ulica, she felt the hopeful little pulse of caffeine seeping into her.
She was dressed for Kolovare, a rock-lined beach with big-bellied men downing bottle after bottle of malty-sweet Karlovačko. The bottles refracted light, painting stones green. Half-naked children would splash at the water’s edge, shrieking delightedly. Women, aged by time and loss, would recline, their draping exposed breasts facing sunward. She had looked forward to the kukuruz man, his wheeled cooler filled with hot corn, sounding the bike horn. His melodious tenor voice would sing out “kukuruz” as he tried to serenade beachgoers into purchasing the foil-wrapped cobs.
But the shoes she’d worn to protect her soles from spiny urchins, little sea hedgehogs hidden among the stones, were carrying her elsewhere. She walked the same sidewalk she’d walked every day for six weeks. Houses reduced to rubble reminded her of skull and crossbones signs at the edge of nearby forests. Like the enshrouded recesses of her mind, there were constant reminders to not go there. Destruction undoubtedly lay in the entangled shrubs.
She slowed as she neared animated old men reminiscing in a small cafe, their heads ruddy from the red shade of umbrellas advertising Franck Kava. They reminded her of how little she knew. She studied their wrinkled faces, their sagging earlobes, their wispy white hair. In their dark foreboding eyes, she found glints of hope embedded in the familiar look of expectation She felt pressure creeping in at the edges. She was a newly minted adult squeezing into the narrow frame of expectancy. She needed to be successful, hardworking, kind, soft, thin but strong, not too much, but definitely enough. The hearty laughter of the robust waitress broke the tightening noose. The somber konobarica took a drag from her cigarette, her free hand firmly planted on her hip, head cocked, as she listened to a one-eyed man regale her with his exaggerated tale of wartime heroics.
She walked slower, soaking in her obscurity. Here she was not a girl or woman, just some Amerikanka making her way down the street.
She made her way through Kopnena Vrata, looking up at the majestic-winged lion guarding the Renaissance archway. She traveled halfway around the cylindrical walls of Sveti Donat Cathedral, trying to absorb the wisdom of past centuries, before carefully stepping onto the paved Roman road. Her shoes glided over stones worn smooth by time, her journey becoming effortless as she reached the sea. This city pulled her to the edge of her soul. The briny expanse had called her, and she had answered.
The sun glistened off the frothing Adriatic, its salty breath disheveling her locks. The melancholic sea organ gently bawled, as waves forced sorrowful notes through the cement piping. Foamy whites and cloudy teals tenderly lapped the lowest steps. On an empty sun-drenched stair, she breathed in wild liberation. Nature’s composition and Slavic conversations lilted. Indistinguishable džs and đs crowded her. But as she looked down the strand, she found comfort in her anonymity.
She was no one here, an invisible body on an alabaster step. She communed more with the sea than the bustling people. They had lives here, histories withstanding the heartbreak of war and deceit. It was more than she could comprehend. Their Catholic Jesus was like her Protestant Jesus back home. But here his countenance was displayed in every cathedral and small church, aloft in the apse and each station of the cross. Zadar’s Jesus and Kansas City’s were pasty ivory. The Middle Eastern deity surely felt more foreign here than she did.
To be good meant to be sinless, a pursuit she had already failed. It seemed nothing but inadequacy lay ahead of her. But presently gulls scattered as a ferry stirred the sea. Swelling waves reached the organ, its tune wailing more splendidly. She was engulfed in whistling melody, each wave pulling the weight of who she was supposed to become from her.
​Zadar, beautifully blemished by Illyrian, Roman, Byzantine, and Hungarian rulers, had been rebuilt again and again. Each iteration retained beau-ty from the previous occupation, an amalgamation of complex renewal. It was here she found hope. She was a stranger basking in the comfort of the resilience of the elegiac Adriatic.
Tweet
Share