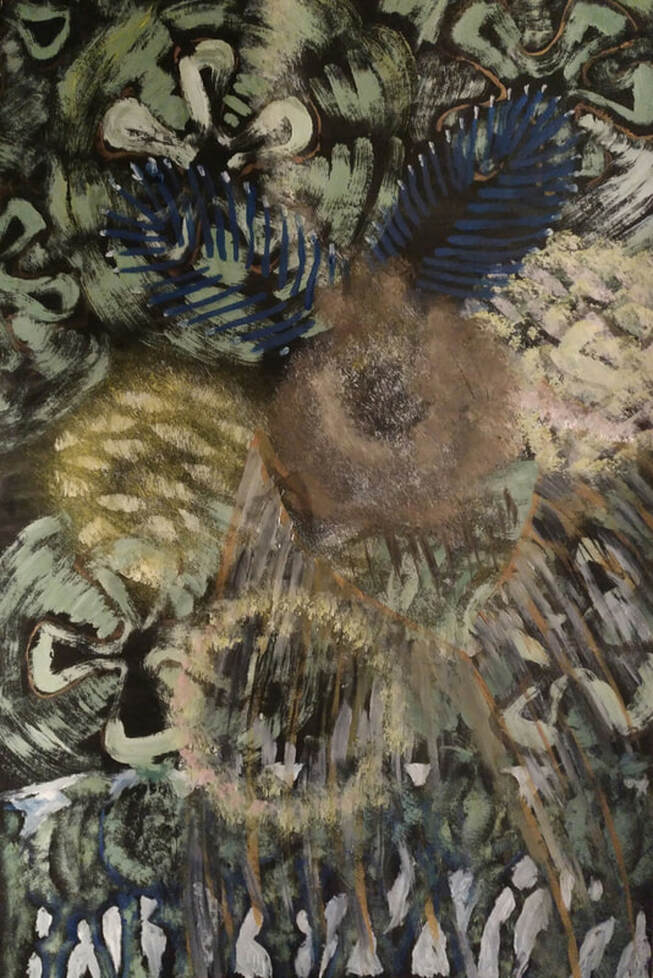 
Along the concrete bed of the River des Peres, under the Arsenal overpass, beside the ruins of a railyard, through an unkempt city park, wildflowers run amuck. No current scurries along this drainage ditch. No small white caps scuttle along the shimmering surface of a gently flowing brook. No deep water, ever, except during flooding rains when the sewers choke and the river backs up, retreats from its mouth, clambers over its banks, submerges streets, reminds us that, it, too, though chained with locks and dams, it, too, when angry, rains savagery over the cultivated land. Then, as quickly as it overflowed, the river dries, hides, in a sense, an attempt to escape its own violent potential.
Today, though, nothing more than a small stream, a miles-long puddle, really, overgrown with thistle and kudzu and honeysuckle. Trash of all types lies like rotted seeds scattered by a by-gone sower. Here, a red Igloo cooler, disturbingly stained crimson, the lid clinging, with desperation, like a child. There, a handle-less refrigerator door, face up, a pried grave ledger, the inscription worn by years of wind. Further down, a near empty case of Budweiser, mysteriously full of unused children’s clothes. Homeless men pitch their camps beneath the overpass and glean from this refuse treasures, a hoard of fetishes to draw blessing, virtu to ward away curses.
The boy and the girl knew nothing of these never-spoken fables. This summer day, redevised that morning, opened to them, wholly, as if God had called the guilty pair, forgiven, bloodless, from the east, a return to the garden, the cherubim beaten back to its bastion in heaven. You can hear them, the angels, singing, in the overgrowth beneath the asphalt, the trucks and cars, the going, the coming, the bustle of worldly concerns, transfigured into a psalm, intoned by a seraphic choir. Paradise, purifying creation to a state before the knowledge of good and evil, when the doomed couple explored each other, like a seeker in a strange land, each body foreign, found nothing lacking.
That day was not this day. As they walked across the uncut park, the girl took off her shoes and let the crabgrass insinuate between her toes, wrap her feet with searching tendrils, tug at her ankles, calling to her, by name: return, return, to the dust. She held her arms out, as if she were crucified on a cross of air, and spun, circle, after circle, after circle, her slight body, the axis of a vortex that was her adolescent life, spinning, spinning, like a devilish whirlpool to pull the boy’s desire closer, closer, until he was lost upon her hidden coral banks just beyond her soft, inviting sands.
An abandoned railyard slept, timeless, across from the cracked cement of the River des Peres. The metal chain fence fell into the ditch here, collapsed there, rusted through other places, meaningless, like ruins of a temple to some forgotten god worshiped by a forsaken people. The girl sat in the shade beneath the viaduct and watched, cloudless, the boy push himself through the fence of the shunting yard, and then return, minutes later, with flowers, wildflowers–tickseed, aster, lizard tail, snakeroot–bunched in his clenched hand. He hefted the flowers above his head. Look, he seemed to say. I have returned, quest fulfilled, these stolen treasures of an ageless chthonic demon, held aloft. In anticipation of her love’s return, the girl combed her hair with her splayed fingers and spread her floral-print sun skirt, as if a deluge of white flowed across a desert landscape.
The boy set the flowers before her. He opened the bunch like a folding fan, the stems the sticks, the blooms the leaves. Stolen, she said. You can’t steal what no one owns, he said. The land belongs to someone, she said. No one planted them, he said. Fair is fair. Still, she said. She hung her hair above the flowers, her head atilt, her eyes averted from the boy’s gaze, and plucked a strand that she twisted into a twine then braided, without breaking a pedicel, florets groundward, so, in the end, the flowers draped, growing from her head, a hanging garden. She began to cry. Her tears dug canals across the mounds of her checks, her lips, her chin.
The boy swept his fingertips through the grooves the tears cut into the girl’s face. With the most modest of touch, almost one tissue of skin opposed to another, he outlined her vermillion border, her cupid’s bow, her philtrum, where he rested his finger. She inhaled his scent, his essence, his announcement of intention. She closed her eyes. He leaned in. His lips smoothed against hers, but she turned away.
A fine mist began to fall, a Swiss lace veil of moisture, with the slightness of a soft snow. But rain it was. And yet the sun shown. The space, that sure bareness about them, liquified and settled on the faces, the arms, the hands, of the boy and of the girl, yet they stayed dry, submerged in this now fluid world.
Their fingers interlaced, like vines, around each other. Their arms woven, one the warp, one the woof, into whole cloth. Their legs, coiled, like laid-up yarn, his legs with the lay, hers against. Then, like figures carved in salt, faint rain softened their bodies. Bone and sinew dissolved, she atop of him, a heap of human form, beneath the Arsenal overpass, along the concrete bed of the River des Peres, like molds beneath heaps of ash, in creeds unknowable, their bodies prayed. They kissed, and like silt washed away in the flood, vanished, ephemeral, into the air.
Tweet
Share