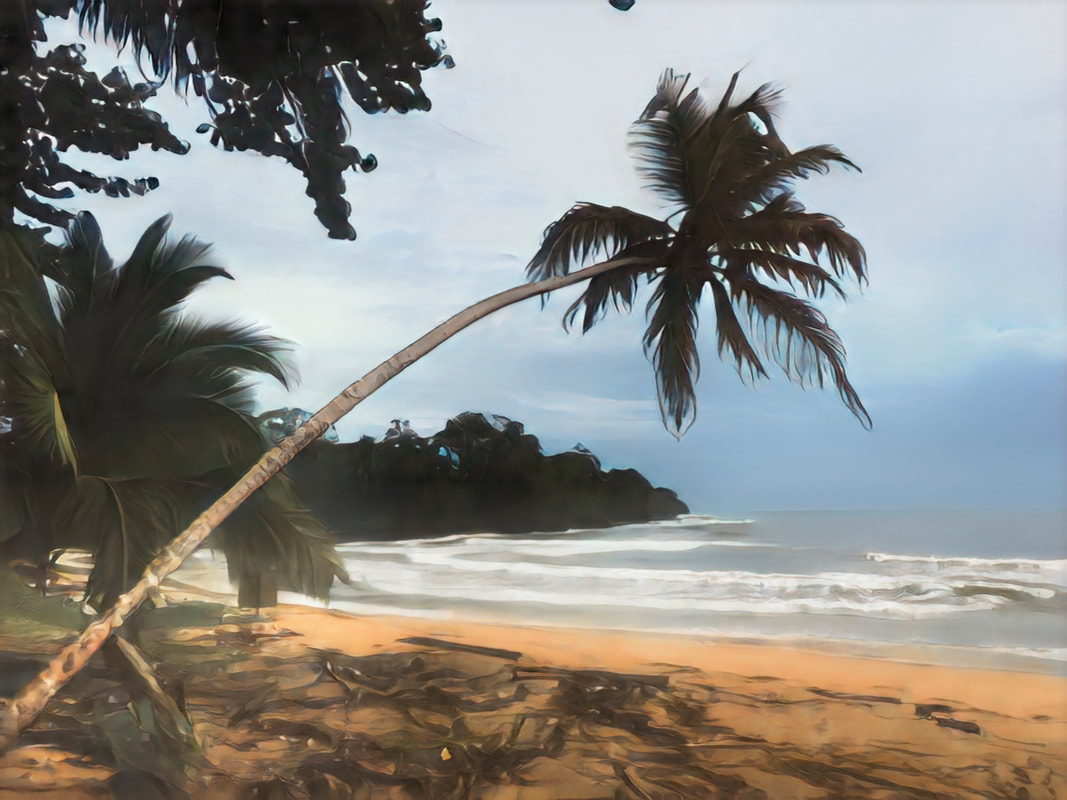 
From Tela, we hike along the beach three kilometers, fording a blood-red mangrove river. We arrive in the small Garífuna settlement of La Ensenada. We are off on a day trip to El Triunfo de la Cruz, another Garífuna village. It is famous for its sopa de caracol (coconut conch soup).
La Ensenada is one of many Central American Caribbean coast villages that were founded in the late eighteenth century, when the British expelled this nation of descendants of African Cimarrons and Arawak-Caribe indigenous from Saint Vincent Island and exiled them on Roatán Island, just off the coast of modern-day Honduras. From there, the exiles migrated to the coast to settle.
“Practice your Spanish,” I tell one of the young Californians who is sharing this outing. He approaches a fair-skinned Latino.
I shrug. I walk up to an eatery. Within, the Garífuna villagers sit talking. Their skin is almost as black as night. “Enter, enter,” I am told.
I smile and bid good afternoon. “Please,” I say, “the way to El Triunfo?” El Triunfo lies almost two kilometers further northeast as the zopilote (vulture) flies. Unlike the other Garífuna villages, though, it is much older–originally established in 1524 by Spanish conquistador Cristóbal de Olid.
“By that road there,” the woman answers. Her plump hand rests on the red gingham tablecloth. She turns to a thin man, “Which fork?”
“The left, the left.”
A reporter, his El Tiempo badge large on his chest, interrupts: “No, by the beach.”
The locals chuckle at his Latino knowledge. “There’s no passage, for the rocks.”
“No passage? I did it earlier today. It’s possible.”
They laugh. “And only a fool would do so. It’s dangerous.”
The reporter turns away.
“No, miss. The road is safer.”
“How much further?”
“Oh, fifteen minutes. Are you alone?”
“No, there are three others.”
“Good. More safe.”

As we set out, the unspoken tale of the Dutchman drifts between the members of our group. He was killed a few weeks earlier, after dark on the road between these two villages. A young German couple, their blond hair in matted dreadlocks, asks to come along. We six walk along the hot, unshaded road. Five are barefoot. Around the bend, weeds grow over a rusting mill.
A pickup passes by. Three Latinos ride in the cab. A Garífuna man rides in back. He pounds the side of the truck, telling them to stop. “To El Triunfo?” he yells to us.
We all climb in. The other five are grateful for the rest.
The driver misses the turnoff. Guillermo shakes his head with a grin. “They don’t know the way.” We hop out, shouting thanks.
​
Guillermo tells us about his small fishing village, where to stay (if we want to spend the night) and where to eat. His smile and neat dreadlocks shine in the afternoon sun. We stroll down a road. In swamp patches on either side, pikes of lavender flowers stud lily pads. My flip-flops send sprays of dirt against my calves. His boots lightly mark the earth with even prints.
“Here, to the beach,” Guillermo says. “It’ll be easier on your feet.” He cuts across a field next to a house. A hammock is strung between two trees in front.The sandy path into town winds under coconut palm shade. The sea shimmers silver-blue.
“Downtown here in El Triunfo is at Restaurante Caracol.” Guillermo points a ways up from it. “I live over there. See you later.”
We sit down at the restaurant, upon the benches around the table. A lean man in a white shirt is making a fishing net. I watch his deft fingers pass the fine cord under and around the emerging mesh. A plastic card evens the spaces. He calls to a woman. She comes out of the house on the other side of the porch. Her belly is round with a child soon-to-be. She brings us cartons of orange juice and two bowls of sopa de caracol.
A group of children arrive running. One girl is tapping out a rhythm on a bright-orange plastic tub. “Can we dance for you?” they chime, faces and voices eager. The bucket is given to an eight-year-old boy to play. Their songs fill this closing afternoon.
Tweet
Share