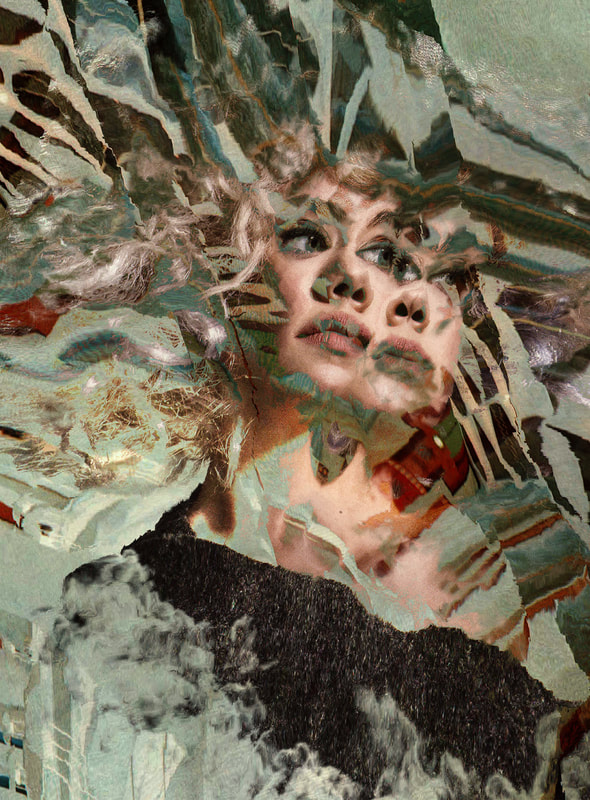 
Self As Spectacle
It was Thursday. A congregation had been visiting on the south side of a parking lot and were marching towards a church. There was no wind, but she was swaying. The sticky summer sun, the bass of a beat from a passing car, the harmonies from True Gospel Tabernacle, staccato, heavy. And there, a city doe, a woman bruised, startled, silently swaying. The woman is me.
Eyes that sharpen, lay upon heads that do not understand her. They do not see the blood and the wine and the whiskey and the burns buried underneath her shirt. They do not know that her soul is growing too heavy, too ripe, too soon. They will march on not having found out. And the ageless doe, carrying beauty, humming notes that belong to her alone, can only see the backside of God. Dusk behind the doe.
And the god, she believes, can give her life, everlasting joy, unbridled ecstasy—an explanation for her suffering. God in a lab coat—white walker mistaken for a healer.

Swinging, swaying, sweating doe on the run. It is not the windless sky, the church bells, or the sun glowing between red-bricked homes and alleyways that shifts the doe’s focus, but a zigzagging bird trailing the tail end of God’s coat that pulls her along.

When the sun goes down and the doe doesn’t want to go on, tell the doe: You are not alone. And that God’s god is money. Do not follow him. I will hold space for you to be and feel whatever you want and need to feel and be. Swinging, swaying, sweating doe on the run. Say, Jesus, slow down.


Self As Legend
Feet—cries, shouts,
Amen
Knees—dust dipped in a blood moon’s harvest
Hips—heavy
Breasts—yielding to eyes
Lips—guardian of her soul
Nose—laced with salt from the sea
Ears—alert
Hair—folded in fat plaits,
Heavy, like lynch-mob ropes
And her eyes, deep pockets, full of scars,
soft seeds feasting on faceless gods.

Georgia, your peaches aren’t sweet. There is something about the sun that shines on those western states that makes me want to run.

Georgia, I can’t go back to where I came from, you left no map for me. So, I walk west, towards that western sun—leaving you in the shadows but never fully gone.


Self As Conduit
Up from the grave, up from the skeleton dust floor, up from the red red brick walls, up from the rotting gums that glow like larvae in the moonrise, his call came. Up from his call, rivers flowed. Dancing like Dorothy down the yellow brick road—except you know the road doesn’t lead you to a castle. The road flows in a circle. Wash, rinse, repeat.


Self As Survival
In this version of myself, I water the rosemary first. Its subtle sweetness hits my tastebuds before my nose. I think of salve, teas, roasting recipes, lemon and fig pairings, boiling it to make oil, infused cheeses, new bath soap—a cold, wet nose nudges my calf. Move along.
To the right of the rosemary is a giant taro plant that I overfed the day before, so I skip watering it and feed the lavender next to it, then a baby taro, a pair of portulacas, and somewhere between the portulacas and the sage, I walk between 1991 and 1996. I am trying to remember my nephew’s birthday. I know he wasn’t born in either of those years, but the birth years of my younger siblings echo the loudest. My sister, senior to our brother, and I to both of them.
Between sunbathed stepping-stones and a vigorous wind that is already too much too early, the sass of a small dog’s howl keeps me anchored in the now—it is 8 a.m.; I am in my backyard, the ground warming my feet, a chatty tiding of magpies just landed in the trees, four plants down, thirteen or so more to go, coffee now entering the game of morning aromas. I’m not sure when this mug appeared, but I am grateful and desperate for it. Nine down, six more to go.
“Remind me to text Mom,” I say to my apprentices, knowing good and well that they will forget seconds later. They are two panting dogs laying at my feet and blocking the path back to the house. You know how they throw those puppy eyes at you—the same way a mother or a grandmother says a prayer over you before you go on a trip. Please return home, safely. For me, return.
They know I’m preparing to leave the house this morning. I’m convinced the eldest dog knows English, took notes from a private conversation my partner and I had and translated them to the smaller pup: “Would you mind picking up the groceries tomorrow?” Ruff arf arf. Arf ruff ruff. Ruff. She’s been up since the day before, pushing a deadline. She needs me.
Six left.

Leaving the house is hard, as it was prior to the shelter-in-place orders. The ultimate test. It is a struggle to rummage enough strength to drive off nightmare sensations of car crashes, of police encounters, of being accosted, and of being a target of any of the phobias, -isms, and -ists. It drains your energy. You see, there is much to consider when making the decision to leave the house: How crowded will the store be if I leave at X time? Do I have to make a trip to multiple stores? Does the store enforce the mask rule? Which route should I take? Do I have to stop for gas? I only have X amount of energy (and patience) for the public. Where and how do I want to spend it? The list of questions can be endless. But I have to decide. Delay or suit up.
Four.

The dogs team up on me. It’s hard not to yield to those eyes, but every now and then, those eyes correspond to my rotating fear of this being the last day home, of being unable to return to this place I enjoy calling home, and I have to yield. There are as many reasons for not leaving the house as there are eyes in the trees. I acknowledge each one, layer on the rationalities. Amongst the animals and the plants, I’m outnumbered. So, the pressure is on. Decide.
To Mom: Is Jordan’s birthday today, tomorrow, or was it yesterday? He’ll be 7, right?
Hit send. Two more to go.
She might not respond. She might be working a double shift. Or, she might be on the road somewhere. I miss her. I need her to return home safe.

There’s breaking news on somewhere. A chorus of reporters flowing across backyards. Somebody’s _______________ was murdered. Rage. Can’t you feel the tension in the air? You cannot tell me there is nothing wrong with the air. See the fists parting heat waves in the sky. Don’t you smell that change?
One.

From Mom: Tomorrow, 2013.
I imagine her on a conservative break by her direct response, and swipe away the thoughts of less favorable possibilities.
More heat. More traces of ash from a wildfire not too far away. Stillness comes in waves. The plants, the bees, the dogs, the grass, the feet of the trees have all been watered, and now it’s my turn. And, still, I must decide.


Self As Sower
We meet in the garden—my other selves and I. Doe meets woman meets child meets Liza Jane meets memory of child meets ancestor meets daughter meets sister meets aunt meets ancient body meets mind reborn meets collective eyes meets more than just herself meets memory of an old perspective of herself meets young woman now sower of seeds and spoken things and meets her future selves. Here, in the garden, time and space become a sanctuary for the living and the dead. There are boundless possibilities for life and second chances, here. And that’s what I need. A space, place, and opportunity to grow, too, into something new. Here, in this garden, sustaining the bridge between the selves is the priority. Without the bridge each version and perspective of myself stands alone in memory, just as I left them. The bridge, which is constructed through my willingness to imagine what rest would look like for the selves individually and as a collective, is required for growth. And so, I square up to the challenge of facing my selves and the unknown in this garden—knowing that I have no control over the past, the future, the growing rate of my plants, the weather, other people, nor the impermanence of my life. Here in this garden, I explore time and waiting. I expand my beliefs about myself. Deepen my curiosity for the things and ideas that spark joy in my life. Shed perfectionism.
Perfectionism dogs me. I cling tightly to the idea that every thing, decision, step, presentation, kink and coil, must be shipshape, especially when making decisions. Even so, I (sometimes) still gravitate towards decisions and making them without centering my desires and needs, which leads to compulsions, abuses, altered perceptions, and misjudgments of reality. I need time to write. I need time to think. I need time to read. I want time to relax in the ways I find relaxing. I want to be perfect. I want you to approve of me. I want to tell you about my needs and how I need to focus on me, first.
The wants and the needs don’t always mix well. I want to sleep in this Sunday, but I need to not set myself up for an ass-whooping by my mom and or my grandma. Or I want to offer you a different perspective, but I need to remain quiet and agree because you are my elder. I have always struggled to understand my identity during, before, and after a power struggle of the wants and the needs—the Great Battle for power over the mind and of the tongue. Think nothing. Say nothing. Delete your opinions. Say nothing. Think nothing. Delete your opinions. Think . . . nothing . . . blank. Blank . . . nothing. Say . . . nothing . . . think blank. Think . . . nothing . . . say nothing . . . say, no. No, nothing. Think blank. No, no thinking. Delete your opinions. Say, you are right.

Here, in this garden, I have learned how to sow the wants and the needs together—without judgement, without constriction, as a witness to blind faith. And my body, my blackity black black body—with all its multiple duplicities—can exist freely, energetically, without restrictions. Say everything. Think everything. Share everything. Speak—even if it’s only to the plants or the dogs.
Here, in this garden, I am sustaining the bridge between my selves and creating patterns for new things to grow. New selves, new perceptions, new foods, new definitions of beauty. And although there were no pear or apple blossoms this year, we still grew. I now know that there are seasons for sowing, seasons for harvest, seasons for growing, and seasons for rest. And, oh, how we found rest here.